YORK – A large group of economic developers from around the state participated in manufacturing and retail tours in the York community on Thursday.

The tours were part of learning opportunities provided during the annual conference of the Nebraska Economic Developers Association (NEDA) which was held in York this year.

Participants were able to tour the Hamilton Sundstrand facility on the manufacturing side. A commerce tour, related to retail business, took place in York’s downtown and interchange areas.

Prior to the tour, York’s Main Street Director Sally Ruben sat down with a number of developers to talk about this community’s interchange business.

“What has the Interstate 80 interchange meant to York?” Ruben said. “The city instituted local city sales tax in 1998 – collections have been at $3.1 million in the last 12 months. We also have lodging tax which is at $267,000. So it’s been extremely beneficial to the city.”

Larry Mertens, the owner of Super 8 Motel and Arby’s, along with Lonnie Berger, the owner of Wendy’s, were on hand to talk about conducting business at the interchange.

“We opened in 1983, the same year Arby’s opened,” Berger explained. “All the land around us was farm ground back then – we even sold pumpkins out here at that time. The attitude was build it and they will come – and they have.

“Now, there are so many different choices out here (different businesses) than there were 30 years ago,” Berger said. “There does come a time when you can be over-developed and I think we’re at that point now. Now, we’re just dividing up the customers – and we’re dividing up the workforce. Staffing is a day to day issue and continues to be an ongoing challenge.”

“It’s been really good (for business out here),” Mertens said. “I think the success of this location had to do with the fact businesses came in here before all the rules and that – when the area was annexed, that’s when we started to see a lot of new regulations all that.”

An economic developer asked what he thought York needed in order to “take things to next level and grow.”

“For sure, we could use industrial jobs,” Mertens said. “Population has been probably our biggest problem as we’ve been at the same number for years.”

“We have new houses being built here all the time, but then the census comes out and says we haven’t grown,” Ruben added. “Yes, population is a challenge.”

Ruben also touched on the downtown – the challenges faced there as more and more business started to migrate toward the interchange.

“It’s not the same downtown as it was when I first came here,” Ruben said.

“But we have some very successful businesses with niche products, internet presence and innovative practices and marketing. We’re holding our own downtown and while it has its challenges, we are seeing successes. The business people are dedicated to making it work and bringing in as many customers to that area as possible.”

The NEDA conference will wrap up this morning (Friday).

Apr 11 2014
YCDC Members: I wanted to make a Monday update and extend a special thank you to the 6 members who submitted their 2014 Investments last week. We have received 90 memberships since starting our Investment Drive, including York County, the Cities of York and Henderson, and the Villages of McCool Junction...Continue Reading

Apr 11 2014
YCDC Members: I wanted to make a Tuesday update and extend a special thank you to the 9 members who submitted their 2014 Investments last week.  We have received 99 memberships since starting our Investment Drive, including York County, the Cities of York and Henderson, and the Villages of McCool Junction...Continue Reading 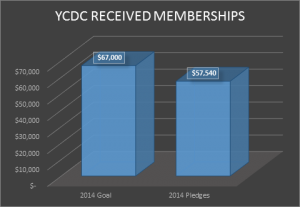 Apr 11 2014
YCDC Membership Drive update:  Thank you to the 3 members who submitted their 2014 Investments last week.  We have received 102 memberships since starting our Investment Drive, including York County, the Cities of York and Henderson, and the Villages of McCool Junction, Waco, Benedict and Bradshaw. We greatly appreciate al...Continue Reading