WHAT IS ECONOMIC DEVELOPMENT? 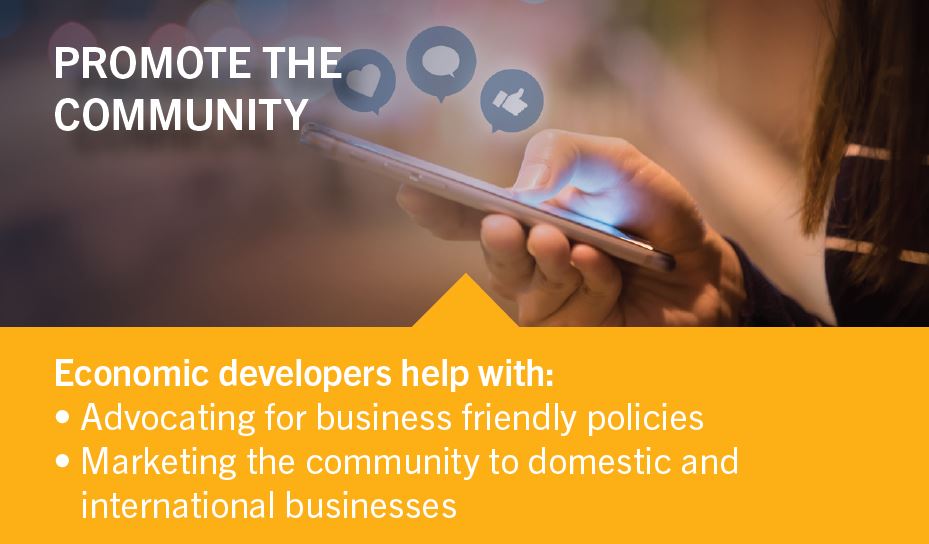 You might have heard the term in an introductory class to economics, or maybe you’ve seen it in passing on the doors of offices around town: economic development.

It sounds like an area of economics meant for business people or investors, related to growing profits. But economic development is actually something more, requiring input from social workers just as much as business leaders.

What does economic development really mean, and why is it important?

ECONOMIC DEVELOPMENT IS NOT ECONOMIC GROWTH

It’s easy to confuse development with growth, considering they have similar meanings and are often used interchangeably. Add the fact that economic growth is an important part of economic development, and you might feel like the room is spinning trying to understand it all.

Economic growth is all about numbers. As the aptly named Keydifferences.com points out: “Economic Growth is the positive change in the real output of the country in a particular span of time.”

Economic growth is a straightforward measurement of actual economic output — things like the gross domestic product (GDP) fall into this measurement. It’s a pure numbers game.

But economic development is much broader in scope and includes elements that you might not normally associate with economics, like social welfare, early childhood education, and criminal justice reform.

THE GOAL OF ECONOMIC DEVELOPMENT

Economic development is defined by Wikipedia as “the process by which a nation improves the economic, political, and social well-being of its people.” As we said, it’s a broad scope.

But this definition doesn’t tell us much about the nuts and bolts of economic development and how it can affect change in a positive way on a big scale.

Because the scope is so broad, it can be difficult to discern what the tangible goals of economic development are. Amy Liu, writing for the Brookings Institute, argues that the goal for economic development should be “to put a region on a path to higher growth by improving the productivity of firms and people in ways that leads to better incomes and living standards for all.”

The end game of economic development is not just growing the economy, but growing it in a way that improves the quality of life for everyone in the region.

Rather than projects benefitting a few investors, a successful economic development project would benefit investors, companies, and people in need of economic relief. By doing so, there is also a positive effect on the region and indirectly businesses and citizens who live there.

This means a focus on innovation, skills, and infrastructure, as well as overall economic growth.

Now we know that the goal of economic development is to improve the well-being of everyone, regardless of race, background, or class, but how does it actually work?

As Britannica.com points out, there is no single definition of what constitutes the process of economic development. But there are key indicators and learnings that have shown success.

It might sound like a pretty big project to try to improve the social and political well-being of a country through economic strategies, and it is. That’s why it’s important to not try to solve it all at a national or international level, but at the local and regional levels.

As Michael Porter, a professor at the Harvard Business School puts it: “While macro policies and regulatory reforms set important conditions for growth and access to opportunity, it is ultimately the role of local and regional actors and institutions to address the unique market failures and opportunities in their community.”

This is why local and regional economic development organizations are so vital. Every metropolitan area has its own unique set of circumstances, and there’s no blanket approach that will work across the diverse economic landscape of a country like the United States (or anywhere else, for that matter).

Denver’s challenges in providing affordable housing, for example, are going to be much different than in New York City. Construction costs are different, timelines will vary based on weather, and managing relationships between private and public sectors will be subject to unique regional policies.

THE HIDDEN ECONOMIC BENEFIT OF INVESTING IN QUALITY OF LIFE

In the U.S. it’s anticipated that as many as 2 million manufacturing jobs will go unfilled by 2025. Children are graduating into the workforce without the skills needed to fill these often lucrative and stable jobs. If business and educational leaders can build partnerships and create pathways early on for students to pick up much-needed skills, the workforce gets a big boost.

That’s economic development at work. It might not have a clear impact on economic growth in the short term, but it will provide a meaningful solution to a widespread problem and one that will improve the quality of life for many students who otherwise may have ended up struggling to find a stable career.

ONE FOR ALL, AND ALL FOR ONE

It’s difficult to unwrap all of the compelling and intricate facets of economic development without writing an entire book, or several books — which several scholars have already done.

Building up economies around processes and strategies that benefit the entire population, and not just a single segment of it, has wide-reaching and long-term economic benefits. At its core, this is what economic development is all about, whether it’s part of government, private business, or anywhere in between.

Apr 30 2020
Over extended and overly risky supply chains are no longer tolerable. Coronavirus is providing new and forceful momentum for the reshoring of manufacturing investment back to the U.S. from China and elsewhere. Our nation’s medical devices and biopharma sector — now dangerously concentrated in China — must be the firs...Continue Reading

COVID-19 - Suffocating the global medical supply chain, while breathing life into its future

Apr 30 2020
The COVID-19 pandemic has further exposed the vulnerabilities of the United States’ reliance on imported medical supplies and equipment. Global manufacturers of these much-needed products have had capacities curtailed due to shutdowns, social distancing, and travel restrictions. At the same time more than 50 countries around the world have embargoe...Continue Reading

Spending All Day At Your Desk? Four Exercises To Boost Productivity When Working From Home

Apr 30 2020
We knew sitting all day was not a healthy lifestyle choice, even before the coronavirus hit. Now, however, without commutes to get us walking, or the ability to stroll down office hallways to see a colleague or join a meeting, it’s even easier to spend all day in one chair...Continue Reading